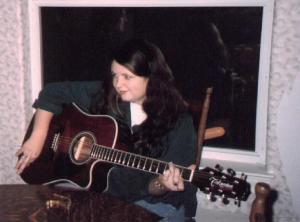 1. I was going to write a Facebook note, but decided against it. Remember notes? Notes were cool. I liked notes. I was going to write one and I figured if my Friends got to the bottom of the note, then they will have read the whole thing. I supposed if they got through it without complaining of boredom, then I’d keep writing them. Or maybe I wouldn’t. Who knows.
2. That’s a photo of me in my 20s playing the guitar. Yesterday, it was my birthday. I’m 43 now. Then just right there below is a photo of me now. Pretty freaky! 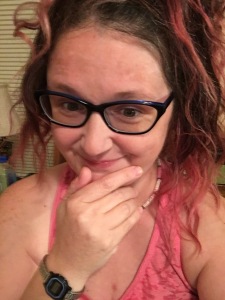 3. I think perhaps I’m tired or something. I’ve really been dragging lately. I’ve decided to try these goofy new supplements. I’m not going to discuss them with the internet, but we’ll see how they go. I put a LOT of work into researching them and they go really well with all my medicine that I am not admitting to taking or saying that I don’t take either. In fact, this paragraph didn’t even happen. I don’t even exist. Just move on to the next thing.
4. I once described this as the Seinfeld of blogs. When I did this, my husband sent me this link which went into vast details about post-modern thought in comedy and how things had evolved. I was not amused and felt like I was being told that my sense of humor was an asshole and that people ten years younger or so than me were a kinder, more intellectual and evolved species of human. This irked me and made me think that I was being told I was some kind of artistic orangutan. I think that my reticence to make everything I write into some kind of a morality play because I don’t WANT to be that ethically superior person dates me. Or maybe it doesn’t.
5. I have a headache.
6. I’m not making excuses.
7. I need a newer computer. Or maybe I just THINK I do. Maybe I can wait. I haven’t decided yet. I think we just THINK we need new things. Maybe it’s a disease.
8. I don’t understand a lot of what has happened in 2016. But I accidentally wrote a book of pretty substantial essays. I don’t want to talk much more about it for fear that I will jinx it though.
9. Why do I want a smart watch? Why? I know I don’t need one. Next I’ll want a chip in my brain, or a flying car. Sigh …..
10. I had coffee too late in the day again. Also, I think my older notes were more intellectual. But I could be wrong about that.
11.There’s no rule saying that items must make sense or that I have to stop at ten.
12. I haven’t turned on chat in any of my apps in thousands of years. I don’t want people to get a hold of me. It seems like going voluntarily to the dentist.
13.You can’t stop at 13. It’s bad luck. I have a house ghost. There’s protocols to follow.
14. I’ve been sneezing a lot today. Maybe this is what my headache is. Or maybe it’s something more dastardly.
15. I still like capitalizing nouns sometimes, and there’s nothing anyone can do about my need to do this precious habit-Thing.
August 10, 2011November 4, 2013 ~ philosophywithfries ~ Leave a comment

1. My legs hurt. Clearly I am too, too old to clean. I need magic Cleaning Creatures. Somebody call Mr. Clean. Does he know them? That bald guy on the cleaning product bottles?
2. I’m not talking about the Brawny guy, they changed him. The Brawny guy used to be hot! Now he is all pudly looking (if you are the Brawny guy and one of My Adoring Public I am so SORRY! Perhaps you took a bad photograph! Or woke up on the wrong side of your blue ox..? It happens to the best of us…)

I also found
a. my baby book
b. poetry (read elsewhere on interwebs in vain attempt not to offend as it is slightly sweary and yet profound and of Artistic Merit)
c. tiny Australian flags
d. wonderful pre-edit lyrics in Hard Copy
e. an elementary school recorder
f. Slipper socks
g. a book of Mad Libs…..

h. embarrassing photos of my old band, Anchorheads
i. tickets to Steamboat where Anchorheads played with people who have actual Music Careers now. Not that I don’t. Or won’t. Or can’t. Any way. I am SURE that these *ahem* GIGGING MUSICIANS are not currently in possession of
j. Aussie Flag Deely-Bobber Antannae with one Flag missing which I bought to surprise husband with for Australia day.
k. Mardi Gras beads which were acquired in a Responsible and Sober fashion. (I am not being Captain Sarcasmo here!!!)
l. Bunny Ears which are fuzzy
m. My SIGG bottle!
n. a weird ass chicken toy which I have already tweeted about
o. several Snooty Soaps
p. Two extremely special CDs
q. A pink guitar pick
r. an entire conga drum
s. a power puff girl sock
t. Pearl S. Buck’s ‘The Good Earth’
u. My Duality237 shirt with circle logo
v. a cow
w. an electric tea kettle
x. angry monster finger puppets which are green and blue, and one little lamb one that is eating grass and is crocheted or something.
y. A complicated boat toy I made from a Kinder Surprise.
z. A box full of WRITING UTENSILS!!!!

(which is ALSO pretty money!!) 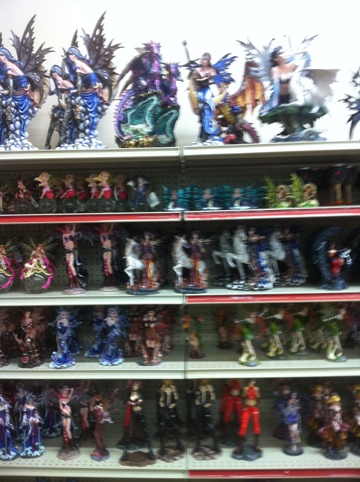 We just stopped at the most amazing place. We knew the minute we saw the Elf Shelf that it was special. Not to mention the moomoo cowcow wind chimes 🙂 Scoreza!!! 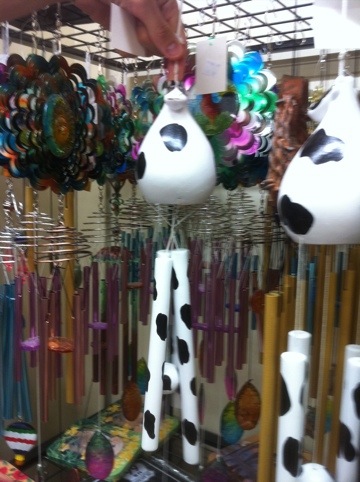 But there is always sadness in a palace of earthly delights. When covetousness hits, you must learn to restrain yourself and WALK AWAY!!! No matter HOW BAD you want the cutecute cupcake timer! Do I need anymore crap in my house?! No! No! A thousand times no!!! 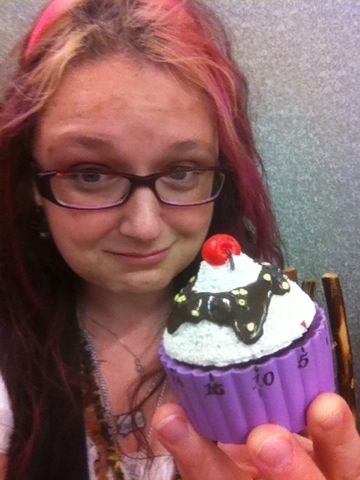 So our visit with Travis Norris blessed me (here we are)… 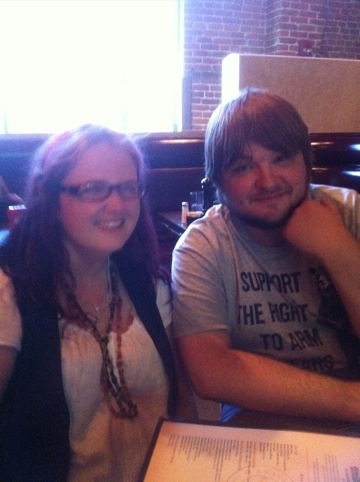 (a photo where I don’t have 80chins, but Mr.Norris is still his photogenic self!)

..and I found a diet flavor of a Mountain Dew Adventure Flavor we’d been discussing over BBQ. It is called an ‘Adventure Flavor’ now because I decided it was 🙂 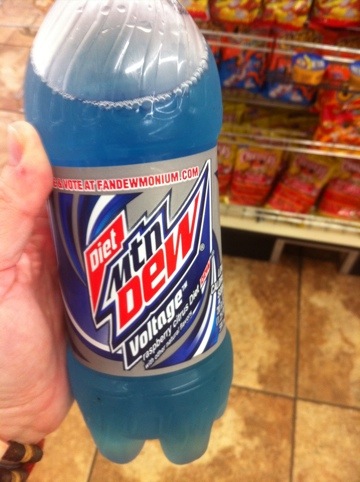 in conclusion, the consensus on Huey and his News – great band!!!!

We have been cleaning our rooms and packing. Mike found in his room.

– The coolest pen of all time 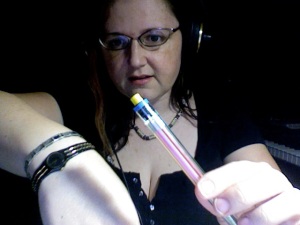 -My watch which has been lost for like THREE YEARS
– the necklace I’m wearing
Another few things
-a postcard of Donald Roller Wilson‘s Mrs. Jenkin’s Late Night Dinner in Her Room Alone (While Out in the Hall Leading to Her Room, Her Small Friends Were Sleeping)

Well I went back down to
high school last night
Remembering that future
trip across the sea
This ain’t Euro Disney,
an opera, or a roller coaster
And I’m only gonna be what I will be